Posted on December 22, 2015 by xochitljulisa

Last night, marked my five year anniversary of hosting HITCHED, a reading series launched in 2010 at Beyond Baroque Literary/Arts Center to celebrate the writer relationships we build that become essential to our careers and mutual successes. Yesterday’s event also marked the first full year of readings (four in all) at HITCHED’s new home, Holy Grounds Coffee & Tea. As the reading has always been a celebration of community, spending the last year at this colorful coffee house patio in East L.A.–close to my home–has made a huge difference in the mood and growth of the reading. I saw audiences grow over the year, and though it was a crisp evening and most in attendance were bundled in scarves and gloves, I was happy to finish out the year with a full and joyous gathering of poets, writers, family and friends that appeared excited to take a break from holiday insanity to share stories, laughter, tears, and truths. 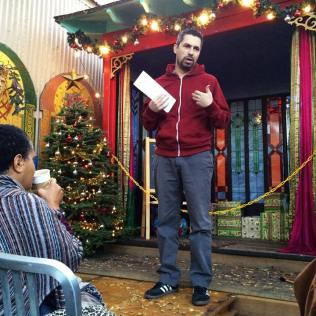 First up, were real-life partners and co-directors of South El Monte Art Posse, Romeo Guzman and Carribean Fragoza. Romeo shared a story about attempting to play soccer with a group of paisanos with not much success, and Carribean followed by sharing a piece about self-love and Zumba. Both stories were the perfect start to a cold evening that put smiles on everyone’s faces and warmed us with lively descriptions of physical activity. An added plus was seeing their beautiful daughter enjoying their words from the crowd along with Romeo’s brothers and mother. 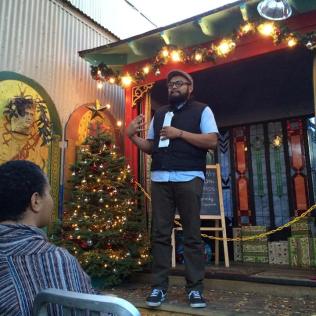 Next up was  Central Valley poet, Joseph Rios, who recently moved to the L.A. area and his self-proclaimed literary soul mate, Chicano poet, Javier Huerta.  Joseph shared fast and funny pieces that mixed Chican@/Latin@ heroes and maestr@s with Rocky III references–you know the one with Mr. T–that finished with a piece called “Eye of the Tiger.” Then Javier came to the stage to share some beautiful poems that ended with a script in progress about Jose Montoya. Javier and Joseph shared the stage for this part, playing themselves arguing over who their top five Chican@/Latin@ poets would be. Spoiler alert: Javier isn’t allowed to pick himself, nor is he allowed to pick Corky Gonzales since he only wrote one poem, even if it was “Yo Soy Joaquin.”

Third coupling to the stage was Tuesday Night Cafe writers and friends, Traci Kato-Kiriyama and Scott Okamoto. I was excited to find that Traci and Scott collaborated on new pieces just for the event reflecting on Scott’s experiences teaching literature at a Christian university–spoiler alert: he got in trouble a lot–and Traci’s experiences on being queer and working with Christian allies. An interesting twist to the evening was the bible study group sitting within ear shot at a table on the lower patio. Before beginning Scott pushed a finger up to his lips and warned, “Ssshhh, don’t tell them.”

Closing out the evening were poetry performers and collaborators Jaha Zainabu and Pam Ward. In researching the readers, I found that Jaha and Pam had collaborated on a performance piece last year entitled, “I didn’t survive slavery for this!” and as the night progressed it became clear that collaboration was the theme of the night. Jaha read powerful pieces from her personal journals, and I wondered how her writing looked within the pages. Pam finished out the night by straddling up to the stage and dropping some funny and heartbreaking pieces on violence in America. Her last piece, “I’ll Be Home for Christmas,” dedicated to the memory of Eric Garner, was the perfect end to the night. Pam stood along side a lit up Christmas tree and called out to the crowd, “I can’t breath. I can’t breath. I can’t breath,” reminding us of all the black men and women who will not be home for Christmas.

The night was filled with poignant moments like these. Traci shared the time she saw a banner exclaiming, “Jesus is the Reason for the Season” and realized the season wasn’t meant for her. Javier and Joseph unabashedly proclaimed their admiration for each other even though men aren’t supposed to do such things. Carribean gave permission to women with curves to Zumba because curves make you better. And all this happened while the bible study group bantered and the Christmas lights twinkled.

Thank you to everyone who came to the event. Thank you for all the love you shared from the stage and from the audience, and thank you for making a cold world feel a little bit warmer.